← One year of 8th Edition, Looking Back, Looking Forward
Little Men in Fancy Hats – ON HORSES →

So GW has kinda pissed me off of late.  Their limp, unexciting releases, stirring around with problems with the rules while not actually addressing the root causes, just trying to patch over the problems.  Despite the fact that they are WAY better than they’ve ever been in a lot of ways, I just don’t feel like giving them money.  Especially when I have NO idea just what the heck will happen to Dark Angels (or any non-ultramarine chapters).

So I need to find something new.

So I’ve started Napoleonics.  I’ve got the wonderful AB line of 18mm miniatures, and am planning an 1809 Army Corps from the big war with Austria.  I’m looking at two rule sets, Fields of Glory: Napoleonic, a more competitively oriented ruleset currently being re-written down in Oz and VERY near publication, and General d’Armee, a ruleset that’s more detail oriented and narrative in scope from what I’ve seen.  My area does have a historical group, they play a lot of games in the same basement where I first rolled dice in fact.  But I won’t be playing games anytime soon, building a new army takes time, and basing these and going back to paint later just isn’t practical, so I’m going to do something I rarely do, take my time, work through my pile of shame. 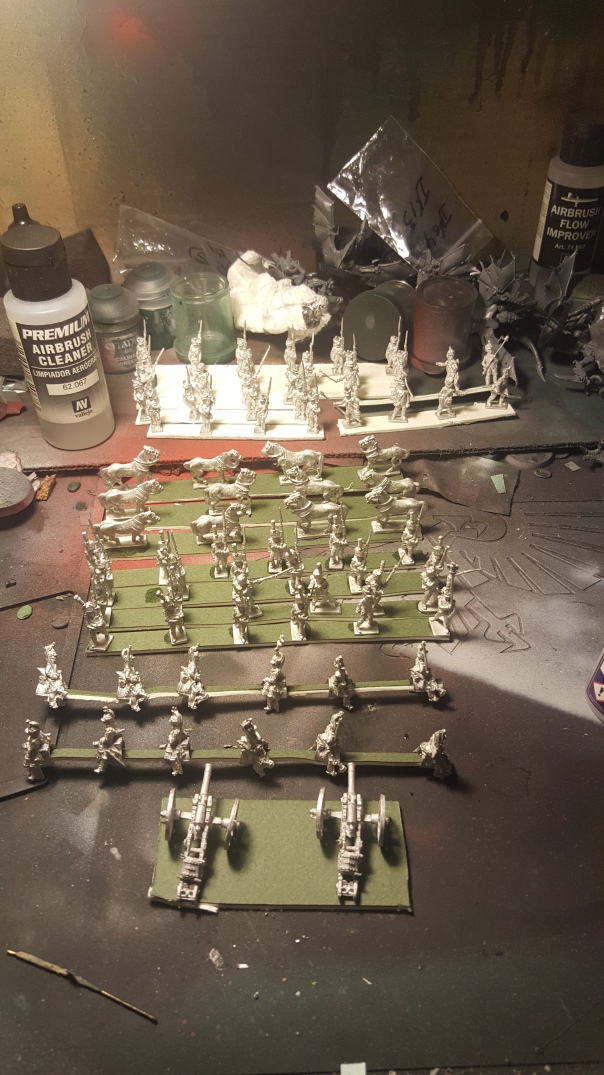 And what a pile it is!

So I’m going to talk a bit about what’s going on here.  These figures don’t go one to a base, they go on in small units.  Painting them lose is… well… not happening, so I attach them to dense cardboard so that I can paint them without going crazy.  Er.  Crazier.

Next I’m let’s talk about what’s in the picture, bottom to top.

There’s some odds and ends missing but again, in Fields of Glory this is a brigade each of Line Infantry, Light Infantry, Heavy Cavalry, and Heavy Artillery, without any attachments or officers.  This would be a pretty substantial mixed division, although not one that would be legal for an 1809 French Army.  So let’s see what all I’ve gotten done! 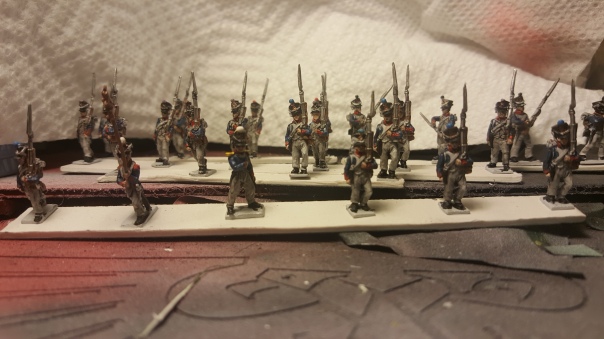 Glued to their Bases, Primaris Intercessor for scale 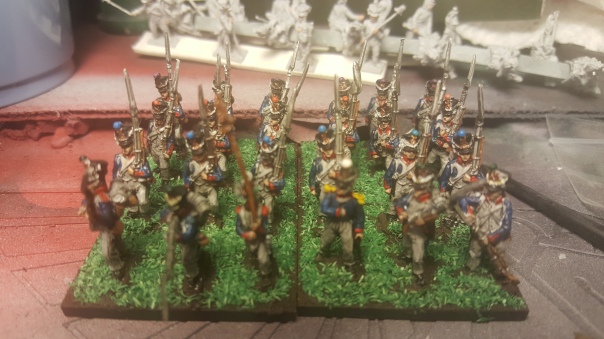 Based… With the wrong flocking

This week I’m finishing the Dragoons, probably with the 11e Regiment.  Green collars and Red turnbacks.

Time permitting I’ll work on the artillery and knock them out as the uniforms aren’t terribly complicated and there’s only 8 of them and 2 guns.  After that it’s the light infantry and then, round one is done.  Next will be some light cavalry, officers, and aides de camp.

One of the things I like a lot about historicals is I can do a unit in a week with enough dedication without too much trouble.  Even at a slower rate of one every other week it’s not awful.  A typical army will have between 8 and 16 units in FOG:N.  The one I’ve penciled in has 11 brigades, 5 attachments (single stands that go with other units) 3 division commanders, a corps commander, and 5 aides de camp.  That’s roughly equivalent to 13 units, of which I’ve nearly got 2 done.  I could have it done (money and time permitting) by New Years, and certainly by my birthday.

Which leaves the “then what” and, well, there’s a couple options, first is playing with the established group, which is infrequent and a good drive away, there’s playing with local players who haven’t started yet, some locals do have armies from before coming to my area, so starting a club shouldn’t be too hard.  Of course there’s also the major cons, which would be VERY nice to attend should I get the option.

Next week look forward to the rest of the dragoons and maybe some redlegs!  Who won’t have red legs because the general in favor of that uniform lost.  Probably why they lost the war.

← One year of 8th Edition, Looking Back, Looking Forward
Little Men in Fancy Hats – ON HORSES →