← World of Tanks: Finding What I Like
Why Aren’t We Doing More? →

So I bought my way into World of Warships.  NEAT game so far.  Right now the beta is early enough that they are still testing out some pretty basic mechanics and there’s a lot of things that should change going forward from ship types (Does anyone know where the Myogi class BBs come from?)  to some mechanics.  Now there’s a lot I could say on that realm but for once I’ll hold my silence.

I’m going to talk about carriers.  I love me some carriers.  Any game where I can build carriers… I’m building carriers.

So I raced to the Langley class and found it to be everything I wanted.  It’s a seal clubber of a ship.  The controls are interesting.  Instead of steering the ship from a “over the shoulder” camera like in WoT or normal WoWS play you get this RTS mode hovering far above the battlefield.  You usually give waypoints to your ship and maneuver it that way, ditty for your fighters, dive bombers and torpedo bombers.  A fully upgraded Langley has a fighter squadron, and two torpedo bomber squadrons.  Launching in concert these TBs can ruin a hostile carrier or battleship in no time flat.  A well-aimed spread (which has to be aimed manually) is just ruinous.  However you have a lot to do as a carrier driver.  You are steering several units at once and when all are engaging it can get frantic.  It isn’t unusual for me to be attacking two separate, maneuvering, targets at once, getting my fighters after enemy bombers and dodging fire from a destroyer that doesn’t get that I’m not interested in buying his used shells.

One of the things I’ve noticed is there’s a lot of BAD carrier drivers out there.  I see a lot of people who keep their planes close at the start of the game, often never sending their fighters out at all.  Words cannot describe how bad this is.  In warfare space = time.  The further ahead you are the less time it will take you to react to enemy moves.  Yes you HAVE less time to make a decision, but a fighter that is 30 seconds away from a torpedo squadron that will hit your battleship in 20 seconds is not doing it’s job.  A fighter that is 15 seconds from that same squadron is.  Position your fighters forward and where they can intercept hostile planes nearing your own major combatants.  Cruisers don’t worry nearly as much about TB attacks and Destroyers laugh at them.

Position TBs off the fore quarter of hostile ships.  You want to fire torpedoes into the flanks of a ship.  Done right it should look something like this 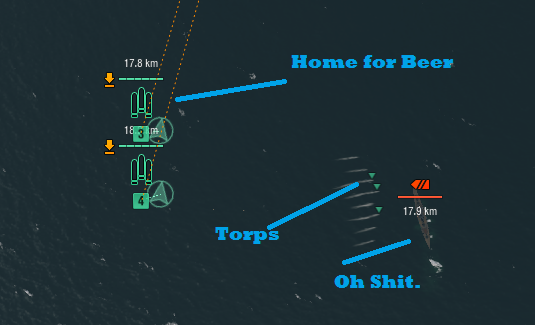 That Kongo is about to have a BAD day.  Note that some torpedoes have a green arrow and some don’t.  The green arrows are “Hot” and the ones without arrows haven’t armed yet.  Later on I managed to hit another Kongo with 5/6 but only one detonated because I dropped too close in and he did something real smart by turning into them.

I only just got the Independence class.  The Dive Bombers are not that impressive so far.  Apparently Dick Best is suffering tuberculosis.  Also the Helldiver biplanes are probably not the swift steeds that the USN needs.  So far I’ve set a few DDs on fire and scared the hell out of a carrier.

Fighters can usually chew up an enemy squadron pretty hard, often destroying it completely before having to go back to the barn.  If you see fighters coming for your attack planes you might want to head for a friendly cruiser or fighter squadron.

Cruisers tear up airplanes.  Once you get to about tier 6 cruisers they are more than capable of breaking up isolated attacks and more than agile enough to dive into the alleys between torpedoes.

Right now, especially in the lower tiers, a carrier can carry the battle.  I’m ok with that for now but honestly I think that the devs need to give lower tier cruisers a buff to their AA ratings.  Not huge but enough that I don’t have the ability to ignore them or even attack them with lone attack squadrons. This is what happens when you leave your fighters “Escorting” your carrier.  I lost two planes.  He lost a carrier.

So how do you counter them?  First off if you are driving a carrier it’s YOUR job to deal with the enemy carrier.  This means pushing your fighters out ahead, near vulnerable, high value units.  Don’t be like the guy above who got wrecked for no return because he thought his fighters should be in a close CAP over his own ship.  I circled him until the fighters were on the far side, and got in a heavy blow, finishing him off and getting well away before the fighters even engaged.

OMG A CARRIER IS COMING FOR ME WHAT DO I DO?

So people think there’s nothing you can do when the planes show up.  There are, in fact, several things you can do.  First off, be in the right place.  Near Cruisers.  Even the lower tier ones have some ability to defend you an the higher tier ones will make TBs go a mile out of their way.  In addition they have a special ability that forces TBs to use a wide sheaf.  I don’t have a good screenshot of that because I’m too busy screaming in frustration to hit Print Screen when that happens.  Let’s just say that it’s about a 120 degree fan and ensures you couldn’t hit a barn from the inside.

Turn into the attack.  This has two beneficial effects.  First off it might make the torps hit you before they activate.  This is amazing when it works.  I’ve seen battleships shrug off massive hits by not taking it on the chin.  Second it means that if you generate a new intercept angle it’s likely that it will be behind the torpedo not in front of it.  You definitely want to cross the trail behind the torpedo.

Kill it with fire!  If you blow apart a carrier its fighters go dumb.  This is obviously the most effective way to deal with carriers.  Also the most lucrative.  They are armored like baby swiss and light up like they are made of avgas and munitions.  Wait… they are!

Carriers are good, they aren’t invincible, they aren’t impossible to deal with, but they do require you to be on your toes.  Go and get ’em!

Posted on April 18, 2015, in Things You Should Know About, World of Warships. Bookmark the permalink. 3 Comments.

← World of Tanks: Finding What I Like
Why Aren’t We Doing More? →